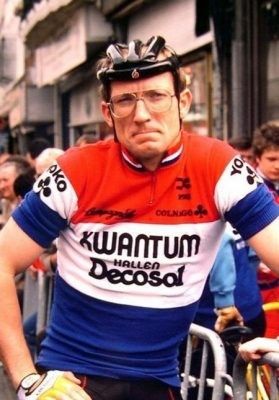 The team Kwantum was founded in 1984, when the mighty TI Raleigh team split after star rider Jan Raas and team leader Peter Post fell out.

This was his last jersey before he retired early on 28 May 1985 at the age of 33 after a terrible crash during Milan-San Remo in 1984 injuring his back and internal organs for which he never fully recovered from. Yet, he still managed to win a final stage in the 1984 Tour de France and the National Road Race Championship. Raas decided to close the curtains on his illustrious career the following season, the day after finishing the 1985 Hansweert criterium.

Raas’ know-how made for a natural move into team management and he became director of the Kwantum squad, later finding new sponsors to create the SuperConfex, Buckler, WordPerfect, Novell and finally Rabobank teams. Raas fully retired from the sport in 2003.

Color: The wonderful tri-colour is the distinctive jersey worn by the "Champion of Holland" in a particular discipline of cycling.

Condition: This jersey is a beauty, in good condition.

• Manufactured from acrylic with flocked lettering.
• Long length zip at the collar 12cm
• Three back pockets at the rear
• Made in Belgium by Decca

Additional information:
After the season of 1983, the TI-Raleigh team split up because of tension between former world champion Jan Raas and team leader Peter Post, with seven cyclists following Post to the new Panasonic-team and six cyclists joining Raas to the Kwantum-Hallen-DecodolYoko team (1984-86). The team captains of the Kwantum team were Guillaume Driessens, Jan Gisbers and Walter Godefroot. In their first year, the team managed to win the red jersey for intermediate sprints and one stage in the 1984 Tour de France, the Amstel Gold Race and the Dutch national road championship. After the 1984 season, Jan Raas stopped as an active cyclist and became team manager.