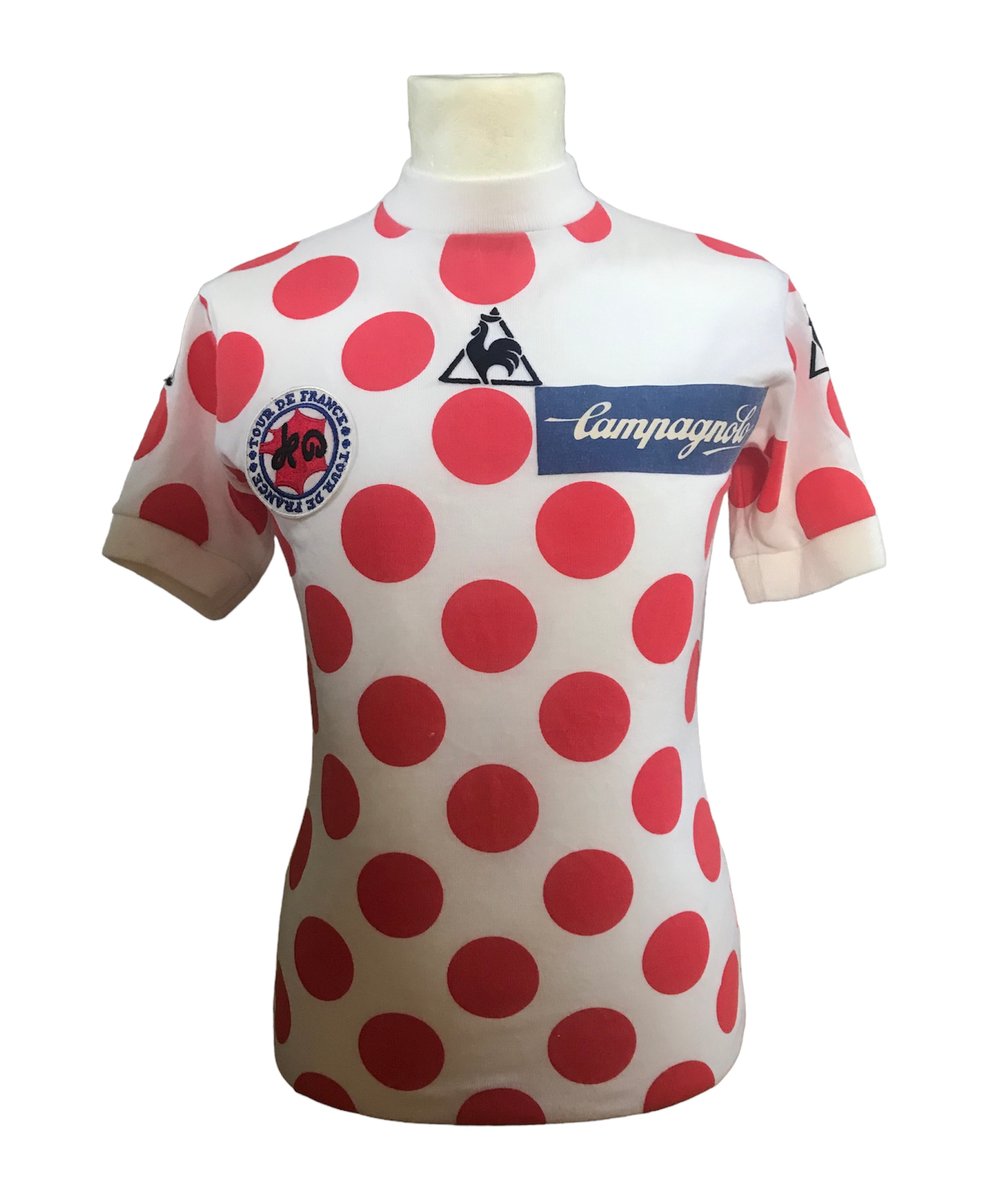 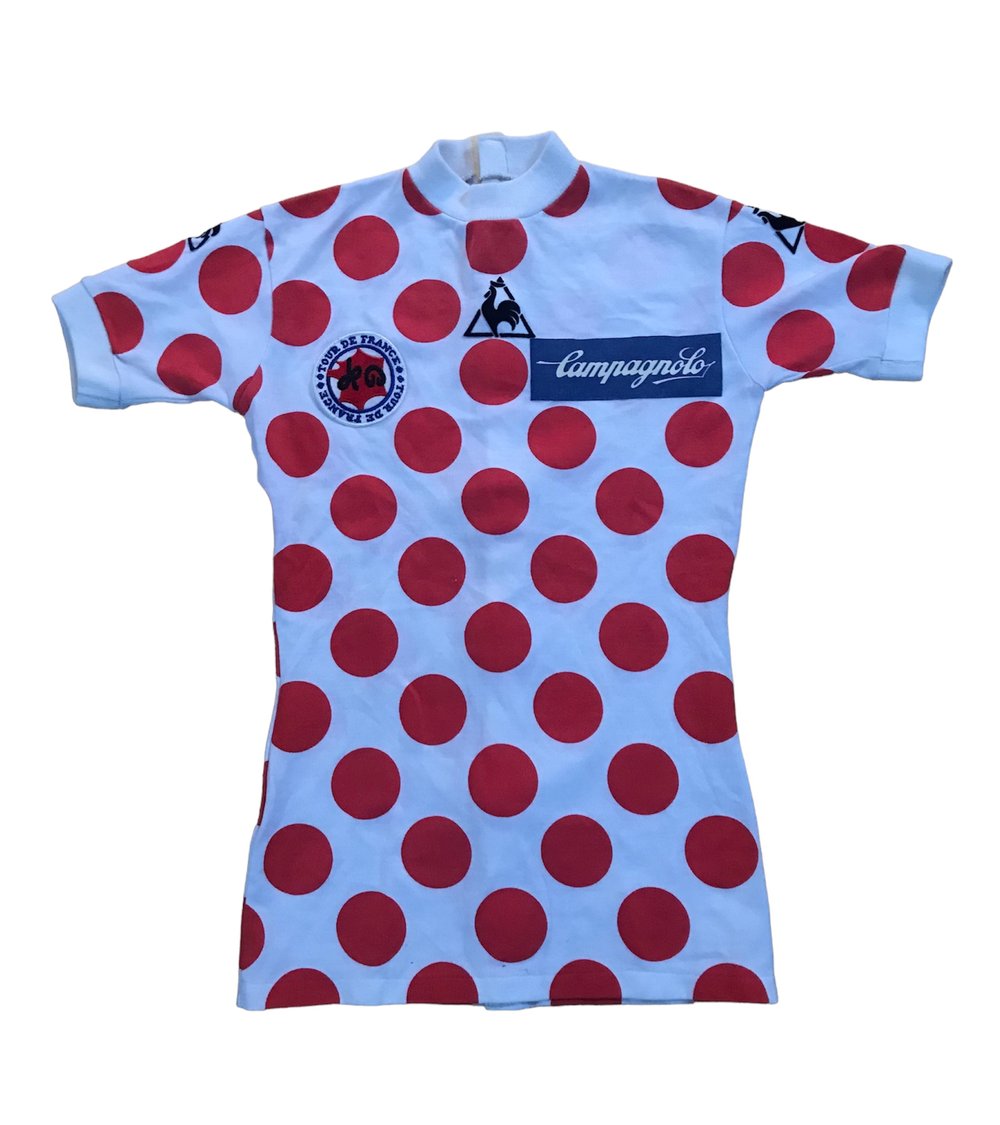 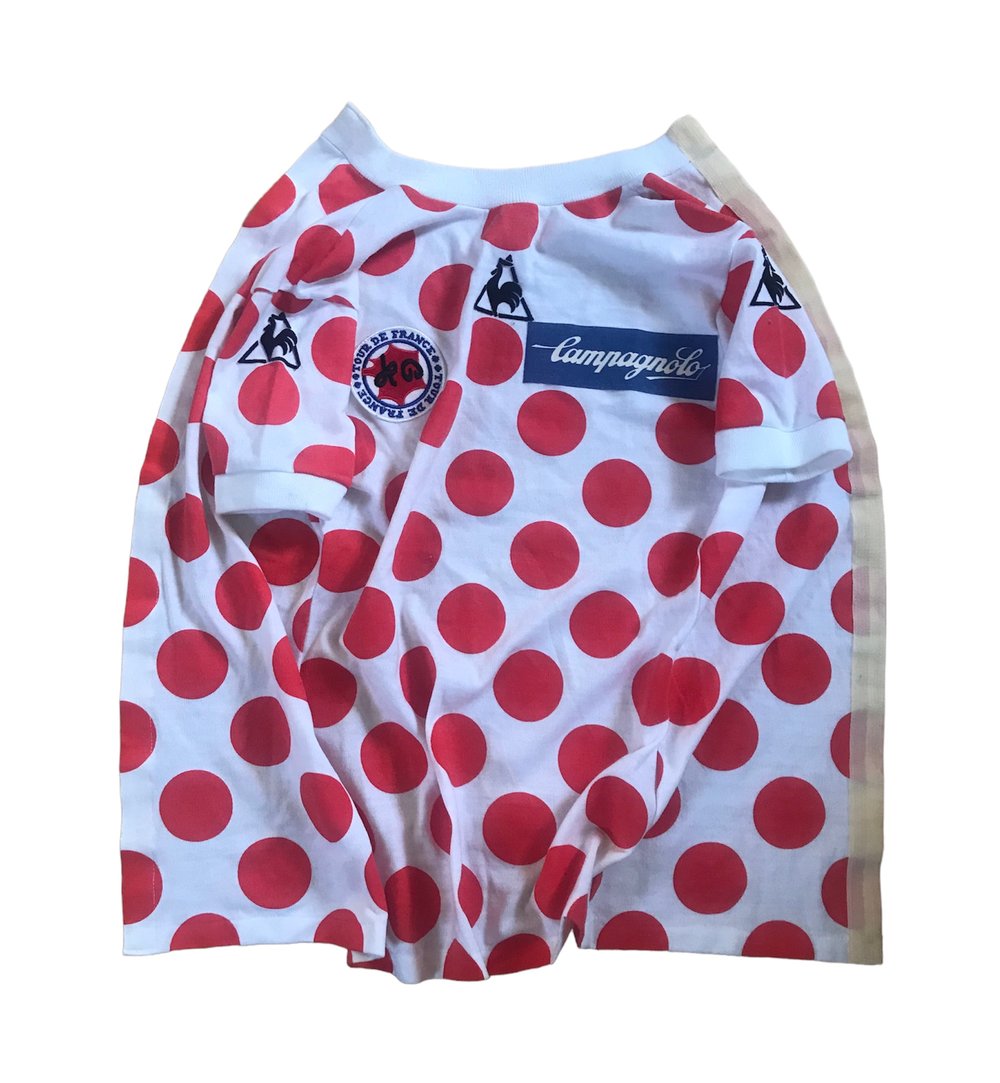 Description:
This 1979 Tour de France polka-dot jersey belonging to Mariano Martinez is awarded to the rider who amasses the most points during mountain stages by being the first to reach the crest of a climb.

Mariano Martinez was a formidable sprinter in the medium and high mountains to take the leader jersey in the best climber classification.

Mariano Martinez took the polka-dot jersey in the evening of the 3rd stage and kept it until the finish of the 12th stage. Giovanni Battaglin took the jersey until the finish on the Champs-Elysées, Mariano finished 3rd of this mountain classification with 158 points behind Battaglin (239 points) and Bernard Hinault (196 points).

Condition: This jersey is in very good condition.

Mariano Martínez, born on 20 September 1948 in Burgos, is a Spanish racing cyclist who became a French citizen in 1963, professional rider from 1971 to 1982. Bronze medallist of the World Road Cycling Championship. An excellent climber, fast in the sprint, he obtained a 6th place in the general classification of the Tour de France in 1978, his best result. Winner of the Premier Pas Dunlop in 1965, this title is also known as the official French Championship of the junior men's road race.

Discovered by Jean de Gribaldy, he quickly became an excellent teammate of Joaquim Agostinho. He won the Grand Prix de la montagne of the Tour de France in 1978. That year, he was also crowned best climber in the Critérium du Dauphiné, the Midi Libre, the Tour du Tarn and the Tour de Suisse (where he also won the points classification). 10 participations in the Tour de France, he won two stages in 1978 and 1980.

Additional information:
Since its creation in 1975, the polka-dot jersey has been the most popular jersey in the Tour de France, a symbol of courage and panache. The decision to wear a distinctive jersey was taken in 1975 at the request of the sponsor of the classification, Chocolat Poulain, who wanted "better exposure".

Felix Levitan came up with the idea of the polka-dot jersey in 1975 when he was co-director of the Tour de France, paying tribute to Henri Lemoine, nicknamed "P'tit pois". Lemoine (born in 1909) was inspired by the racetrack and jockeys' helmets to design his polka dot track suit. Félix Lévitan (1911-2007), a journalist in his early days, had in fact devoted an article to the pistard Henri Lemoine entitled "Hommage à un grand champion".

It was worn for the first time by the Dutch rider Joop Zoetemelk, on June 27, 1975, almost without wanting to. At the top of the very modest côte de Bomerée, just outside the Belgian city of Charleroi, Eddy Merckx cut his effort off 50 metres from the banner, in order to plan an attack further down the course. Merckx, the greatest champion in history, would never wear the jersey.